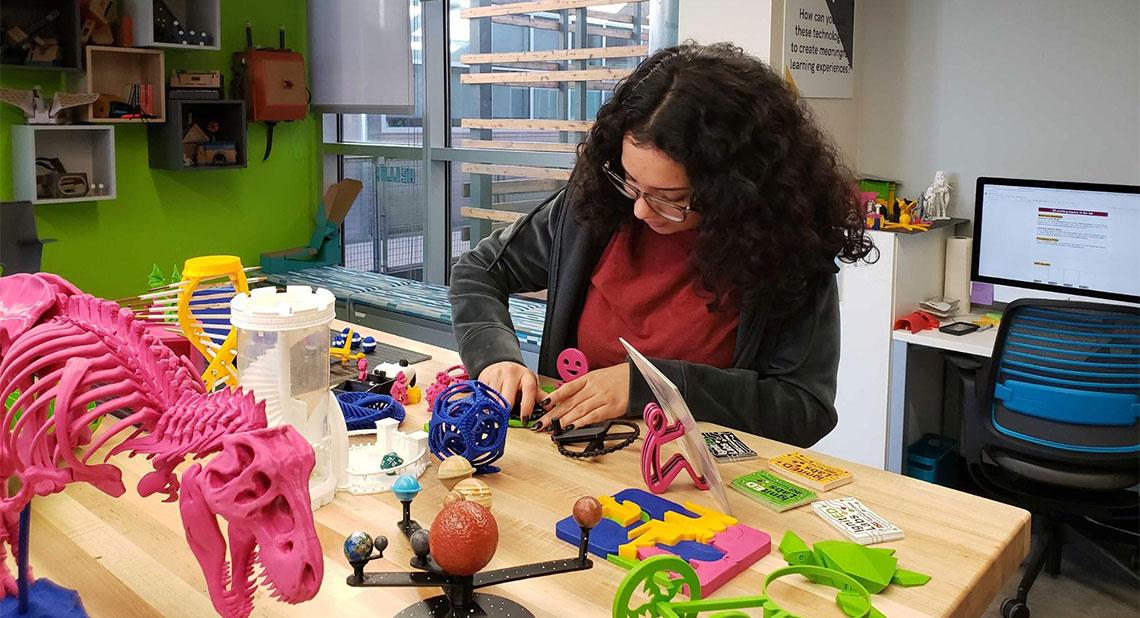 The Tempe Lab, located in Farmer 144, has a crew of five student workers ready to collaborate and teach lab visitors. Returning for the second year as an ETC, Alejandra Arana is pursuing her Bachelor of Science in Computer Information Systems in W. P. Carey. Ashley Goernitz and Anushka Katayan are also in their second year of employment in the lab. They are ETC Leads. Ashley is earning her BS/MCS in Computer Science from Ira A. Fulton Schools of Engineering. Anushka’s degree programs at W. P. Carey include an MBA in Supply Chain Management and an MS in Business Analytics. Abhijeet Savant joined the group in October, as did Aishwarya Batchu. Abhijeet is in the Master of Industrial Design program at the Herberger Institute for Design and the Arts. Aishwarya is earning her Master’s in Computer Engineering (Computer Systems) from Ira A. Fulton Schools of Engineering. All ETCs provide service related to learning about lab technologies. Lab hours are Monday through Friday from 9:00 am to 5:30 pm.

Caitlin Jorgensen, previously an ETC Lead, has transitioned into the role of Management Intern at the Polytechnic Lab after receiving her degree in Graphic Information Technology. Joining her are two ETCs. Sabrina Cervantes is another student in Ira A. Fulton Schools of Engineering with a major in Human Systems Engineering. Connor Weese is also an engineering student, and he supports both the Tempe Lab and the Poly Lab. He is in the Computer Science (Software Engineering) program, working toward his BS. Visitors can stop in the Poly Lab between 9:00 am and 5:30 pm.

The West Lab is a joint space. MLFTC knows it as the IgnitED Lab West, but to Herberger Young Scholars Academy students, faculty, and staff, it is their Design Lab. Abhijith Jagadeesh, another engineering student, is earning his MS in Robotics and Autonomous Systems. He works on Fridays and Saturdays. Starting soon will be Dania Al-Qasemy. She is majoring in psychology. Due to the partnership with HYSA, the IgnitED Lab hours are limited at IgnitED Lab West. Hours are available on the IgnitED Lab website. The site also includes an overview of experiences visitors can expect and blog posts about events involving the Labs.

ETCs are ready and eager to share their knowledge and enthusiasm for learning with all visitors.

This post was originally published on the IgnitED Labs site and has been included here with permission.