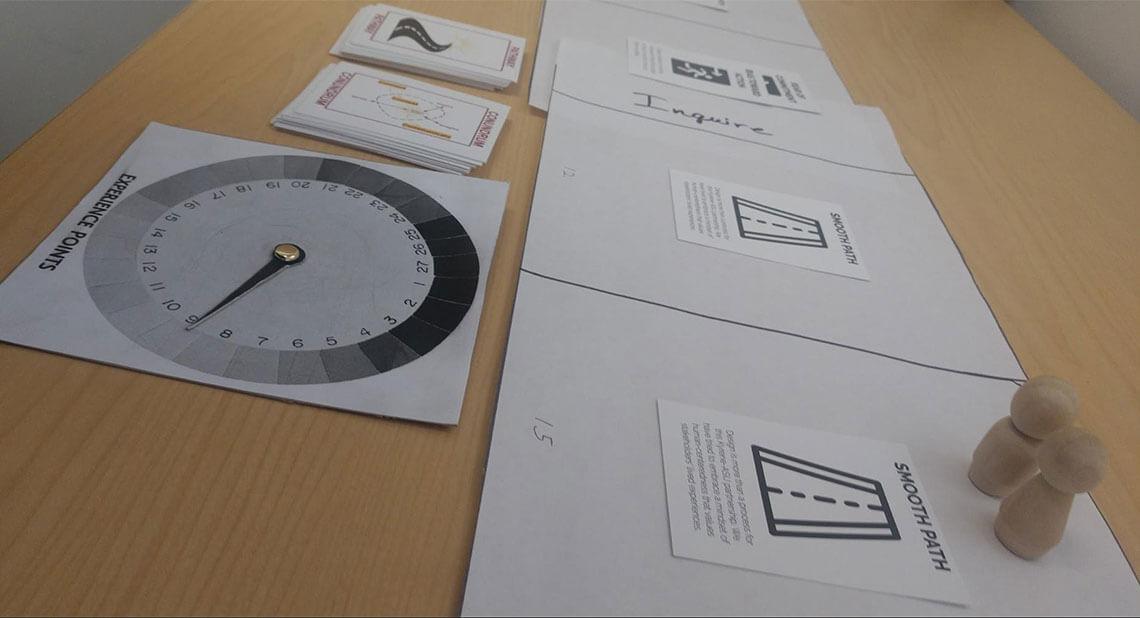 Design-ception: designing a game of design

Before you can build an education or training game, it’s important to figure out what the instructional goals and learning objectives need to be for your players. This might seem obvious, but unless written-out it can be easy to lose sight of your objectives in favor of just creating a fun game.

In the case of a design session simulator I was asked to create, I started by filling out a form I created for instructional design activities. This format was taken from the book “Play to Learn” by Sharon Boller and Karl Kapp.

Once I had this information filled out, I could determine which game mechanics would best model the kinds of experiences players would encounter in a design process. For example, would this be a competitive or collaborative experience? If it were competitive, players would all compete against one another to accomplish the goal. If it is collaborative (as it is in a design process) the players are working together to accomplish the goal.

The game is meant to transfer design knowledge to the players, but also to create a series of thoughtful collaborative conversations that help players determine the best strategic choices to help them get through the game.

Knowing that the game needed to introduce players to a consistent design process, I felt it was important to model the game board after the Principled Innovation Design process developed within the Office of Scholarship and Innovation. I also wanted the knowledge and experience that players gained while playing to be both cumulative, and aid them in the game through challenges of increasing difficulty. I determined that the best way to accomplish this was for players to be able to gain knowledge resources that would aid them and have point values that would be additive to overcome challenges with assigned point values. I determined that this game mechanic would model the kinds of knowledge and experience designers gain when working to develop a design solution.

With a basic set of game mechanics in mind, I began several rounds of testing with my colleagues in the office to make sure that the game would play out as expected. This involved quick iteration where the prototypes were very simple, created with pen and paper. The visual quality of the game at this point is less important than its playability, and the design could change significantly in a way that would affect aesthetics anyway, so worrying about the visual component would be counter-productive at this early stage.

A series of tests refined the gameplay but proved that the mechanics would work as expected. While the game is still in development, it shows promise for delivering a fun and educational experience.