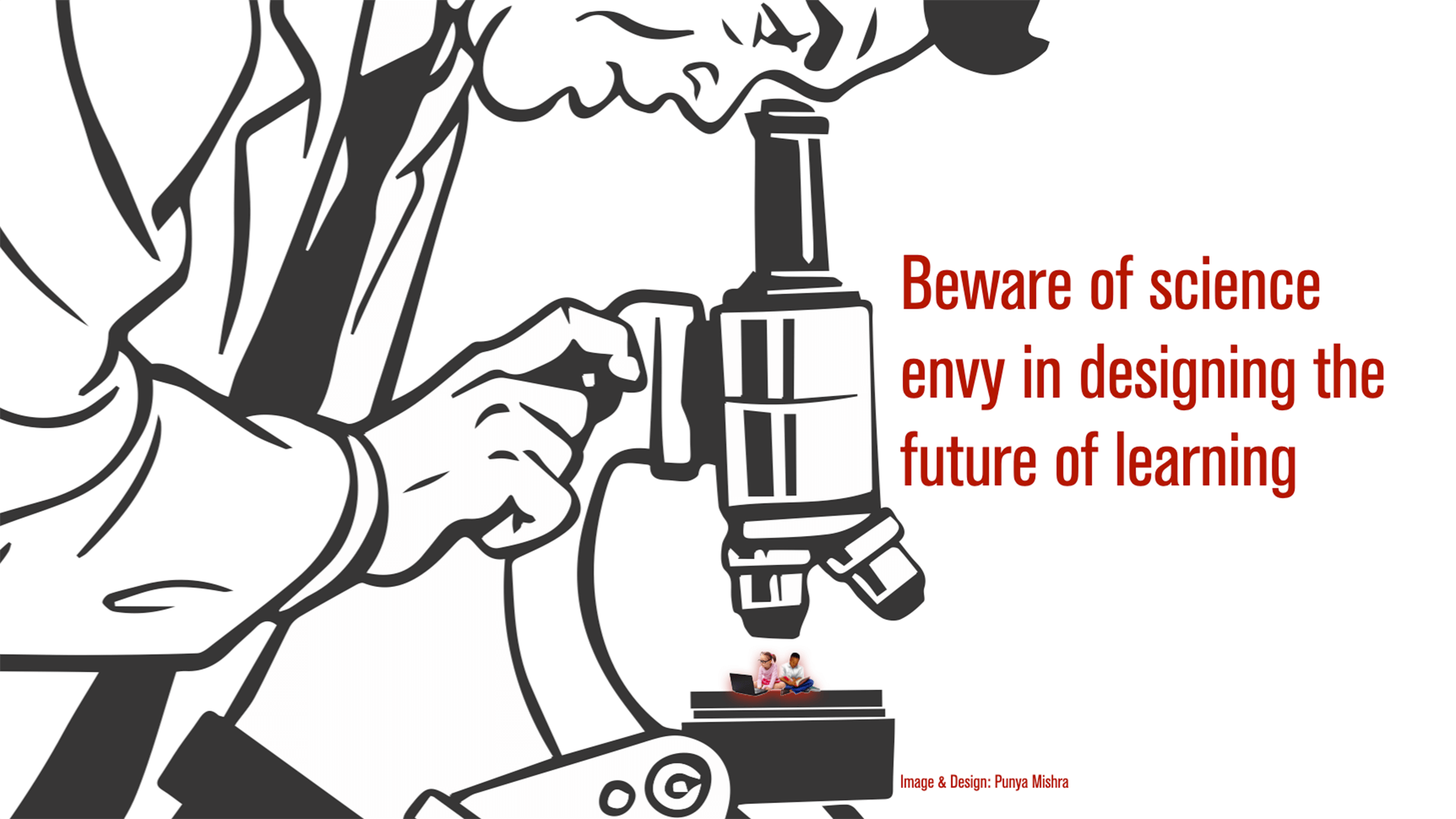 Beware of science envy in designing the future of learning

Mike Crowley has a guest post on the silverliningforlearning.org site titled: If we need to be right before we move. (If you haven’t read it, I recommend it strongly. Go ahead follow the link above. I’ll be waiting).

I think Mike makes some wonderful points in his post, in particular I loved the bulleted list of “learnings” that he hopes we take away from this crisis.

But maybe the most important thing in his piece is in the quote that he bases his title on. He quotes the director of WHO as saying:

If we need to be right before we move, we will never win.

I would paraphrase that somewhat – mainly because I am not sure what “winning” means in education. What winning means, I think, is clearer, in the world of epidemiology, not necessarily so in the world of education. Zhao makes a similar argument for the question “Does it work?” when it comes to online education, and calls it the most meaningless (and even dangerous) question.

That said, there is much talk in education about the value of evidence-based-practice (or EBP) i.e. that decisions on educational policy and practice should be based on sound empirical evidence.

There are few who can argue against this point of view. But as in all matters that deal with the real world, it’s complicated.

For instance, consider the Randomized Control Trials (or RCT’s), often considered the gold standard of research. RCT’s have had great value in medicine—to determine the efficacy of a drug or a treatment. The application to other domains, such as public policy or education, is not as straightforward.

There is a wonderful debate between Nobel laureates Abhijit Banerjee and Angus Deaton on the value (or lack thereof) of RCT’s which is truly worth watching in full, (if for nothing but to hear Angus Deaton description of playing Angry Birds as a metaphor for research).

Banerjee argues for RCT’s, saying that there is no other way of determining causality, whether a particular intervention has the effect we are looking for or not. However, as Deaton argues,

RCTs may identify a causal connection in one situation, but the cause might be specific to that trial and not a general principle. In a Rube Goldberg machine, flying a kite sharpens a pencil, but kite flying does not normally cause pencil sharpening. In other words, the context is everything.

Context is everything. And this is where the connection to education becomes key.

In the context of the current educational crisis (1.5 billion learners out of school) we are facing right now consider this:

Decades of evidence-based research just went poof because 1.5 billion kids just went off the “educational” grid and will return to some kind of a different future.

The video below is a few days old but I am confident that the numbers are worse, not better.

As the economist Jean Dréze writes (in an article titled Some questions around the use of evidence based policy): what ultimately matters is not just evidence (broadly defined) but understanding.

In a similar vein, David Berliner pushes back against, what he calls, “science-envy” in the humanities, or against experimental design as being the only gold standard in education (Educational Research: The Hardest Science of All).

Education will always be shrouded in ambiguity, that we will never know everything we need to know. Education, like parenting and life, is a wicked problem. We try to get as much information as we can and move ahead, trying to do the best job we can. 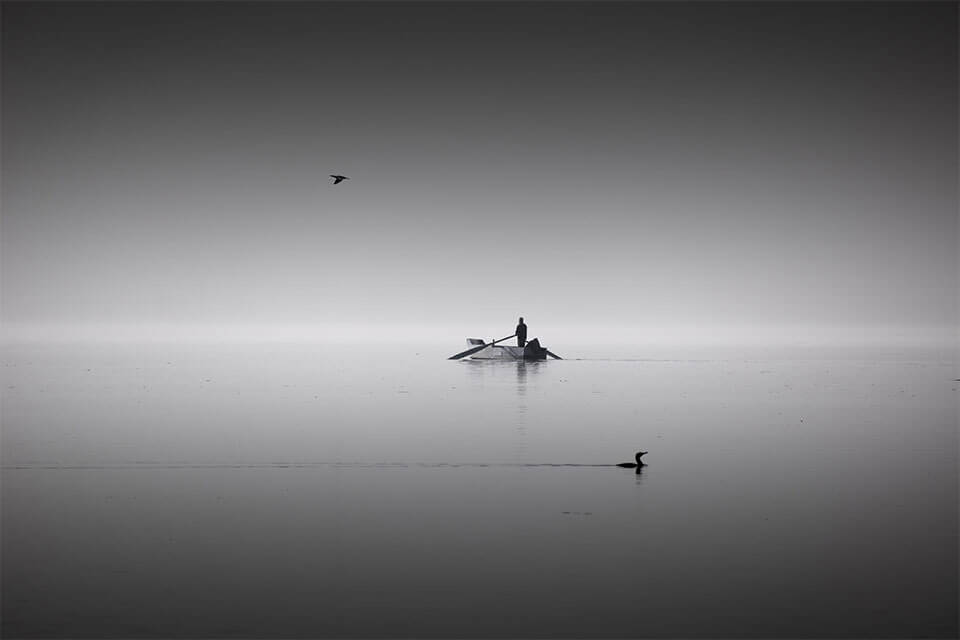 One of my favorite quotes about education is from Farley who wrote:

The process of education is not a natural phenomena… It is man-made (sic), designed to serve our purposes and meet our needs. … It is not in need of research to find out how it works. It is in need of creative invention to make it work better.

One thing this crisis has made clear—that education is badly in need of creative invention.

And this creative invention will emerge not just based on what we know from empirical research but also from understanding. The deep understanding that we educators bring to the task at hand. The empathy that we bring to learners and their unique contexts and propensities. It will come from a sensitivity to broader systems and cultures within which education functions. The learnings that Mike describes in his post.

This creative invention will also come from a taking a critical stance towards buzz-words such as “disruptive innovation” and “creative destruction.” We have lived through a decade of these phrases being bandied about and the consequences of the willy-nilly implementation of these ides. We have lived through Google’s motto of “Don’t be evil,” which was gently retired a couple of years ago. And of course, there is Facebook and its famous mantra of “Move fast and break things” And we know where that has led us.

I want to be clear that I am not arguing for moving slowly. We are all in a situation where we have no choice but move fast.

But at the same time, we need to focus on the historical, cultural, economic and political context of what we do. In a previous post I argued for Postman’s 5 rules for thinking about any new technology. These are questions we should ask ourselves as we move forward. This is the work we are involved in at the Office of Scholarship and Innovation at the Teachers College around Learning Futures and Principled Innovation.

It is not about moving fast and breaking things but rather about Moving intentionally and nurturing things.

I will give Mike the last word, as he wrote in his conclusion:

When future generations and historians reflect on this moment in time, one wonders what narrative will prevail? How did we respond? Most importantly, what did we learn from this experience?

Here are some links to follow if you are interested in learning more about some of the ideas mentioned above: