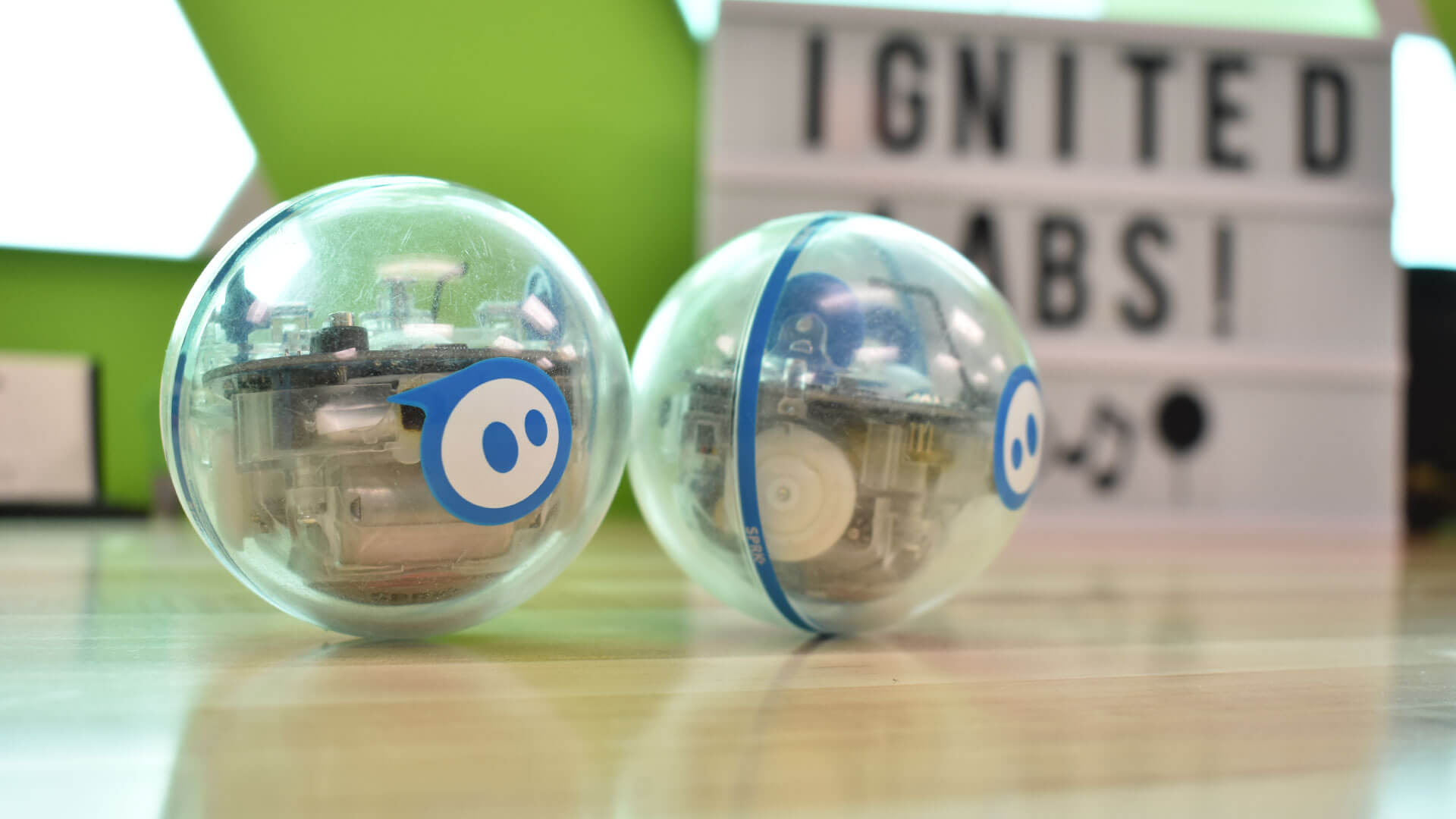 Beep boop beep! The electronic sound of robotic language is not only captivating, it can be downright inspiring. Looking a little closer, the actual written language (JavaScript) for the charming little beeps offers a peek into the power of programmable robots.

While many people might see programmable robots as something for “coders” or engineers, they are actually very approachable and easy to work with. In early November, the Technology Initiatives Team participated in a Saturday workshop for Coronado High School focused on integrating technology into its classrooms. While the workshop consisted of three main technology-centered stations: programmables (robots), digital storytelling and mobile computing, I wanted to share in more detail the programmables component because this is the one that included the use of some pretty fun little robots.

Programmables are a generic term for a category of code-enabled toy robots. For our workshop, we used the Sphero SPRK+ (pronounced “spark”) which is a small, clear robotic orb that contains a sophisticated array of gyroscopes, accelerometers, sensors, motors and lights. The SPRK+ is controlled via Bluetooth connection to an app-enabled smartphone or tablet (iOS or Android).

Sphero SPRK+ is an accessible robot, which was one of the main reasons we decided to use this particular robot for the workshop. The robot can be controlled in several ways. The first, easiest and perhaps the most accessible method is to simply steer the robot using your smartphone as a remote control. The additional ways to control the robot revolve around three methods of programming: drawing, blocks and text. The various programming methods allow for varying levels of programming experience and development with the device. Drawing allows a user to draw a “path” on their smartphone grid for the robot to follow. The blocks option (the most powerful visual method for intermediate coders) allows users to program the SPRK+ by dragging visual blocks of code into the program allowing them to reorder, and provide attributes and other options to each block of code to create a unique program they can execute on the robot. The most advanced method of control, meant for serious coders, is to control the robot purely through JavaScript.

Why use programmables to infuse technology in the classroom?

One of the reasons we showcased this particular programmable robot was to demonstrate the many ways in which this device can be used in the classroom. Given the various methods by which this robot can be controlled, any level of coding can be used. This makes it so it is not limited to one age group or competency level and was designed with learner progression in mind. One of the main aims of the workshop was to challenge the teachers to think how they might use this technology in the classroom to promote critical thinking, computational thinking, storytelling and meaningful play. While this device (and many other similar devices) can be used solely with the purpose of developing programming skills, it can move far beyond the code and be used in transdisciplinary methods that incorporate STEAM activities.

The workshop attendees were excited to have a chance to learn and operate this type of educational technology device and even started to share their ideas on ways they could use this in their classes. Many of the teachers we worked with during the workshop were very enthusiastic about working with these, or similar robots in their class, and even commented on how the initial “draw” to the robots would get their students excited about learning traditional mathematical and geometric principles, like programming a toy robot through a maze.

For more information on the Sphero SPRK+, visit the Sphero EDU website to go beyond the code.